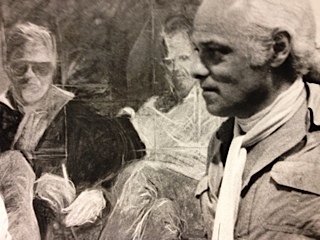 Studied at the School of Arts Manuel Belgrano and Prilidiano Puyrredon of Buenos Aires, and in parallel studied trumpet at the Conservatory of Buenos Aires

He began his career as a jazz musician at the age of 17 in the “Georgians Band Jazz” group as well as drawing cartoons, sharing a studio with Hugo Pratt

Travels to Italy In 1964 where he starts working for Mondadori in Milano.

In 1966 he decides to move to Barcelona. He starts as the art director in an advertising agency as well as forming the jazz group “Yerba Mate”.

He works as a cartoonist for the press: El Universal, Telexpress, El Pais, La Vanguardia.

In the 80s he devoted himself to painting, by exhibiting in San Sebastian (for the jazz festival), Barcelona, ​​Toulouse and Buenos Aires.

In the 90s changed from figurative paintings to abstraction.

In 1994 he received in Miami the Hispanic International Award Ranan R. Lurie for his work on political cartoons

In 2000 returns to portraits and exhibits his work on composers of contemporary music.

He is interested in the years 20s, 30s, and 40s in all art forms: architecture, art deco, Busby Berkeley musicals and the composer G. Gershwin. This drives him to make a book about the mafia “There is no crime without a hat”